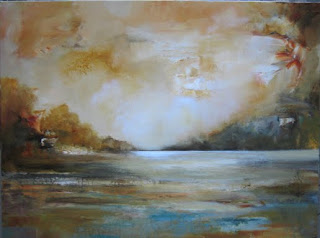 Here's one of the paintings I'll be taking with me to a show in Chicago this weekend, entitled "Exhale". For those in the Highland Park area, I hope to see you there!

For info on the show, visit: http://www.amdurproductions.com/f-portclinton-public.html
Posted by ARTIST: CAT TESLA at 9:44 PM No comments:

My Dog is a Farter 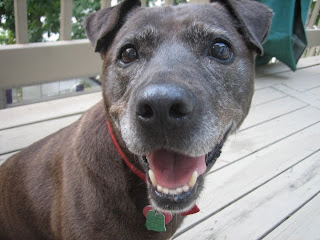 The past 2 weeks I've been painting away in my studio - finishing 3 commissions, several pieces for a new gallery (more on that later :), and getting ready for a show next weekend. It's a busy time, and I'm grateful for it.
While in the studio my dog Ruby is usually there napping. Occasionally she gets up to take a stretch and go outside through her little doggie door. As it turns out, I began to smell something not so pleasant one morning. . .and then turned to see Ruby slinking out her door! Could it be that she knows when she farts? A few minutes later she peaked her head in and I gave her the "OK" to return.
It happened again a few days later. What can I say? My dog is a farter. Now if I can just get her to leave before she does it again. . .
Posted by ARTIST: CAT TESLA at 12:24 PM No comments: