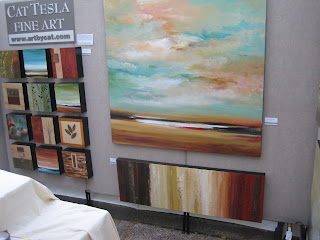 So I'm back in HOTlanta from Philly and just thinking about the whole Rittenhouse Square Show experience. Philadelphia is such a mix for the senses:  you've got the history, the architecture, the well-heeled women in shiny modern skirts with frilly blouses long lashes and a dab of red lipstick walking by on their way to the office, tall dark and handsome 20-somethings in their suits who look like they've just walked off the pages of GQ, mixed in with a few homeless, a few drunks, and a guy with a monkey on his back. A 40ish guy wearing shorts and t-shirt was walking around Rittenhouse Square with a stuffed monkey on his back - (the monkey's) arms hanging around his shoulders, the body hanging low on his back, past his shorts. He had the same attitude as the younger GQ guys, but wore a monkey instead of a suit.

A totally drunk-as-a-skunk guy, reeking of alcohol and fresh burp smells saunters into my booth and looks around at all of the paintings rather closely. He focuses in on my "Outside of the Box" series of paintings, passes them, circles around, and returns. He smiles and exits my booth, presenting his swaying stinky self in front of me. "Hiya, I like the boxes. I work in concrete and are those concrete?" (nope, they're wood) "But I could make the boxes out of concrete and they'd be heavy (really?) since they're concrete but I could make them". He smiles, proud of his epiphany. "But I could make them. They'd be heavy" (where have I heard this before?). He stumbles along, smiling to himself.

An older gentleman with a chunk of baby-fine hair sticking up in the back walks into my booth carefully examining the artwork. He is thin-framed and delicate, his footsteps silent. Like an inspector of sorts, he goes from one painting to the next, then passes in front of my artist statement, tilts his head back and scrunches up his nose, squinting. He reads it word for word, circles around, looks my way and nods, and exits. Joins his wife and daughter who were waiting for him. I see them continue walking the show. A few booths later, he backtracks through the flow of traffic and approaches me. "Are you Ms. Tesla? I wanted to tell you that I like that you stated in your artist statement that the divine is within us all. I've always believed that."

You've just gotta love Philly. The Rittenhouse Square Fine Art Show is a gem:  not just because of the city and it's cast of characters, but because this city knows and loves art.  My "morning meditation" abstract paintings on paper nearly sold out, along with sales of paintings on birch and canvas. Thanks to all of my new collectors in Brooklyn, New Jersey, and downtown Philly!
Posted by ARTIST: CAT TESLA at 8:20 AM