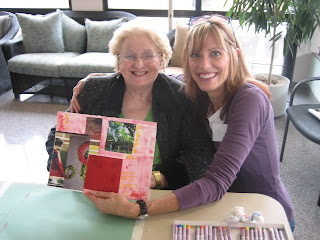 So this morning I had the privilege of teaching a collage/mixed media workshop to patients with Alzheimer's and dementia. It was a wonderful experience - there was a lot of laughter and lots of playing. Interestingly, persons with dementia are not inhibited when it comes to the use of color and form. In 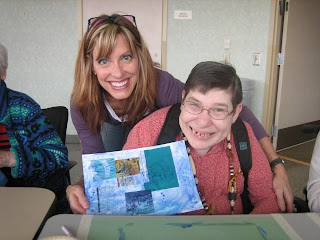 fact, they embrace it!! 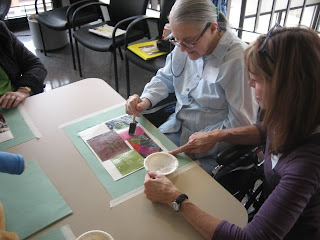 If any of you are artists reading this entry, please consider volunteering. It's only a few hours out of your day to make a huge difference in the lives of others. I had a blast! 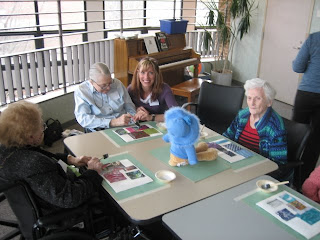 Posted by ARTIST: CAT TESLA at 5:26 PM No comments:

If you're a reader of the New York Times, you may have noticed a growing number of articles over the past few years about the effect of music and art on Alzheimer's disease. Typically individuals with Alzheimer's develop what doctors refer to as the four A's: anxiety, aggression, agitation, and apathy. However, when patients are in front of great art, they calm down, and their "emotional memory" comes alive. Emotional memory refers to the feelings they've had related to people and events in their past. It turns out that deeply held memories and creative impulses remain intact even as the disease advances - the problem is patients can't access them. Researchers in Alzheimer's disease theorize that art can serve as a kind of road map to parts of the brain that govern memory and communication.

In 2006, the Museum of Modern Art in New York developed the Meet Me at MoMA program, specifically designed for people with Alzheimer's disease and their caregivers. The project entails monthly interactive tours of the Museum's renowned collection of modern art and special exhibitions for individuals in the early and middle stages of the disease, along with their family and caregivers.

In addition to viewing art, affected individuals can also benefit from creating art. Artists for Alzheimer's is a nationwide program for artists, musicians, actors, chefs, and dancers to volunteer once a year in an assisted living home for persons with dementia and Alzheimer's disease, to share and teach their craft to the patients. The Spruill Center for the Arts in Atlanta began artist training last fall, in collaboration with the Alzheimer's Association of Georgia, and the William Bremen Jewish Home. I went through the Artists for Alzheimer's-Atlanta training program in January and was absolutely amazed! Even a patient in the later stages of Alzheimer's responded to a watercolor class. Her abstract painting was more than an outlet for healing - I could see that she had real talent. When I found out later that she used to be a professional artist, my heart broke.

I'm in the process of developing a mixed media collage painting class that I will be teaching to patients at the William Bremen Jewish Home later this month. I'll be talking about my experience on my blog in future posts. Stay tuned!
Posted by ARTIST: CAT TESLA at 9:14 AM 3 comments:

For those of you who live in sunny Jupiter, Florida, I'll be joining you President's Day weekend as one of the artists in the Artigras Fine Art Festival! In its 24th year, this art show is the jewel of northern Palm Beach County. My booth # is 210 and I'll be showcasing fresh new works from the studio! Mark your calendars and come on by - I look forward to seeing you!

ARTIST: CAT TESLA
It is said that a cat has 9 lives. I'm on my 3rd. For me college was a toss-up between art & science; I chose the latter. My 1st life was a decade as a genetic counselor seeing patients in high-risk prenatal & cancer clinics. My 2nd life a hybrid of genetic clinics by day, painting by night, traveling to art shows on weekends.Eventually it was time to go. My 3rd life as a full-time artist had begun. I’m a painter & can often be found sketching ideas on yellow sticky notes, cocktail napkins, & the edges of grocery lists. Ideas come & they come often. Design is everywhere. Inspiration isn't far behind. I am guilty of doing too many things at once. Personality tests describe me as pioneering, creative, visionary, & a self-starter. Oh, & tenacious. I was born in the Chinese Year of the Rabbit - 1963 - & for those curious, my parents didn't name me after an animal. "Cat" is short for Catherine. Thanks for visiting my blog where I'll provide a peek into my life as an artist, sources of inspiration, previews of my artwork. http://www.artbycat.com